I’m wrapping up the Rebirth Revisited series with one of my favorite types of articles to write, a top ten list. This took some doing, as there are many good stories in Rebirth and very consistent quality, so a lot of these were splitting hairs. Even so, I thought it might be fun to put a list out there of my personal favorites (spoilers ahead!!).

Please note that I did not include Lois and Clark, which for me I would probably put at number one on this list, nor did I include the short five-pagers from Action 1000, which were also brilliant. It was just everything from Superman Rebirth 1 to Jurgens and Tomasi’s final stories in Action 1000. A lot of great stuff to pick from there, I hope you enjoy!

This story was enjoyable because it dealt with the Superman/Luthor relationship with a new twist: is this universe’s Luthor guilty of crimes a future self might commit? In a Minority Report-esque premise, two warriors- L’Call the Godslayer and his partner Zade- capture Lex Luthor and take him back to their homeworld because a precog has declared that Luthor will one day commit genocide on Darkseid’s throne. Superman, who has long suspected this universe’s quasi-hero Lex of secretly being a criminal, must make the choice to either assist Luthor’s captors or to intervene.

I loved how L’Call was eventually made into a sympathetic character, and would love to see him be part of Superman’s rogues gallery in the future. Also, of particular note is the artwork of Patch Zircher, who for me delivers his best work on this run in this story, with sharp pencils and wonderful use of Ben Day dots! Why more artists don’t just lean into comics’ pop culture heritage and use these more often is confusing to me, but I love when artists do. A solid arc.

I was a little hard on this story when I reviewed it a few years back, but after I saw where the DCU was going with Doomsday Clock, and rereading it this time, I have a little bit of a different view of it. My main hang up with this story the first time around was retconning Superman’s origin (something I’m not a fan of doing to established characters, in general), but it works within the larger framework, even if it clashed with the tone of the rest of Rebirth. The dark tone of the story actually works on its own and is thought provoking, especially considering how it puts Supes, and we the readers, through the ringer. Still not the greatest art with Viktor Bogdonovic, but nevertheless a really interesting story. 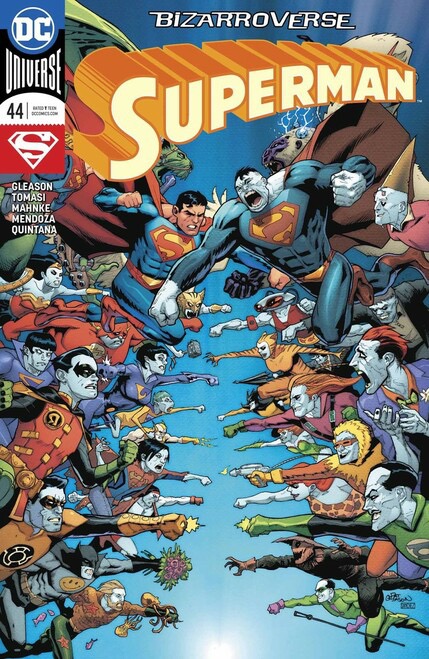 With Superman now a family man in Rebirth, a fertile area for storytelling was juxtaposing his family with his rogues gallery. Peter Tomasi had the brilliant idea of pairing the Super family with Bizarro and his family in this story, which begins with a page for page homage to Superman (Rebirth) #1. A good story with equal parts heart and action, a theme of all of Rebirth, ensues.

The other choice Tomasi and Gleason make here which I appreciate was more or less picking up this story where Geoff Johns’ “Escape from Bizzaro World” leaves off. I enjoyed Geoff Johns’ Action Comics quite a bit (still waiting for more deluxe editions), so it’s nice to see that run acknowledged as part of Superman lore now. A really creative way of establishing Superman’s family and expanding his villain collection at the same time.

I love how DC has fully embraced their multiverse again. I enjoyed the post-Crisis DCU as well, don’t get me wrong, but there are a ton of stories to tell in parallel universes. Leaning into this concept with Superman provides for some really enjoyable reading.

Superman teaming up with multiple versions of himself to fight a formidable bad guy, drawn by an all-star lineup of artists (Ivan Reís, Ryan Sook, Ed Benes, Tony Daniel & Clay Mann, among others)… how can you go wrong? This story lived up to its potential and ended up being a fun romp through the multiverse, showing the importance of Superman in any universe. 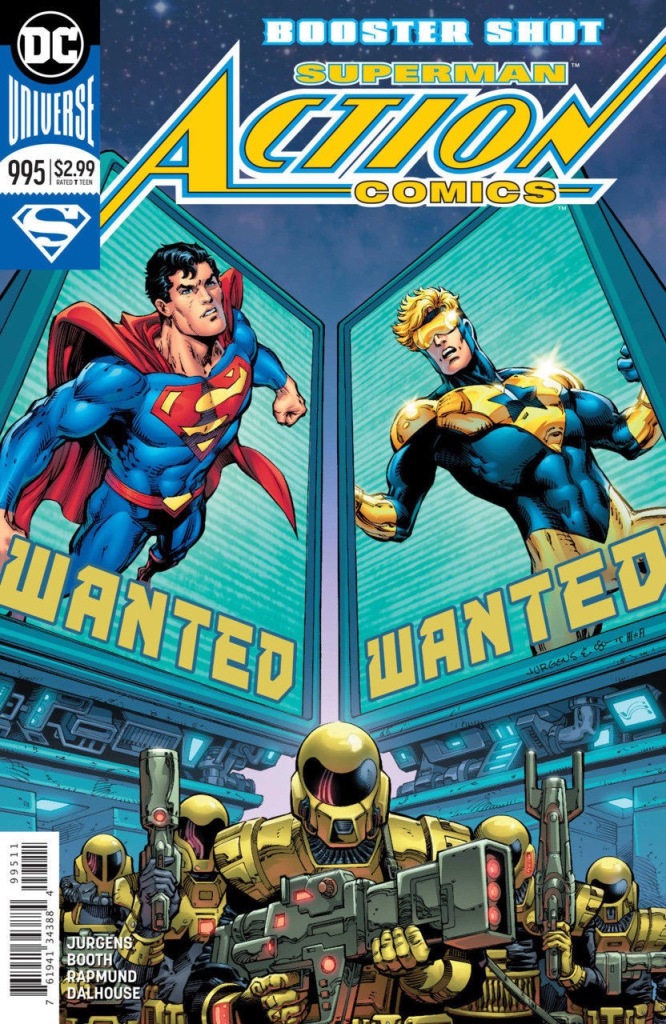 The aforementioned choice of juxtaposing Superman’s family with his villains is in full display in this story. “Booster Shot” essentially deals with fatherhood at its essence, and this time involves Superman’s family vs. General Zod’s. The premise may sound a bit simple, but when you throw in Lois’ simultaneous quest to rescue her father, and time travel with Jurgens mainstay Booster Gold, also affected by his relationship with his father, you have a very complex, fun read.

There are two notable firsts in this arc as well, for me. The first was the revelation that is Will Conrad, a nice artist whose work is hugely refreshing after “Oz Effect’s” Bogdanovic. The second is one that might be a first just for me, but I don’t know if I can recall a time when Dan Jurgens wrote General Zod prior to these issues. Hard to believe perhaps, but it just goes to show that the best writers can still find ways to do new things, regardless of how many times you’ve seen their work!

(NOTE that I reviewed this arc a few years back here) 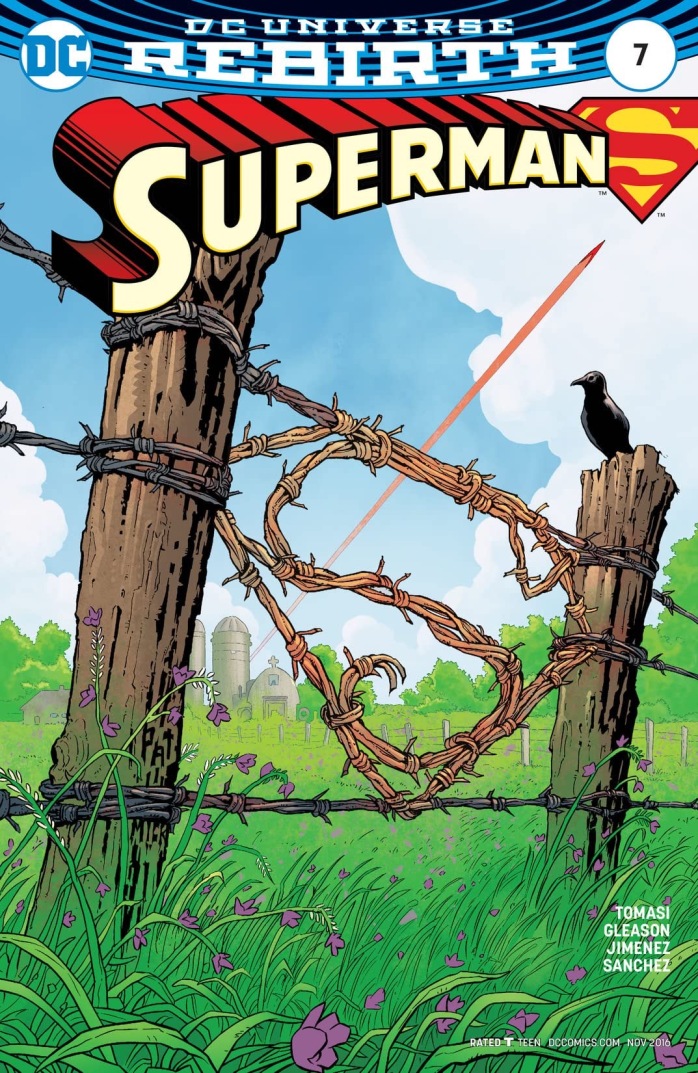 In this stand alone, epilogue issue to Tomasi and Gleason’s initial arc on the book, Supes promises Lois no superheroing for one evening, as he takes his family to Hamilton’s county fair.

Hamilton County is certainly not Metropolis, and this was the first issue since Lois and Clark that showed the Kents embracing life outside the big city. They spend quality time together as a family and run into people they know from school and other parts of town, and have a semi-quiet evening together.

I love this issue because Tomasi and Gleason, unashamed, basically just show Superman being a dad. I also love “down time” issues made famous by Claremont’s X-Men, which make for a nice change of pace after world threatening danger. Of note also is this is the first issue drawn by Jorge Jimenez, who would go on to do many more Superman Rebirth stories and eventually Super Sons.

Like “County Fair,” this issue features a standalone, down time story with a lot of heart and the Kents in Hamilton County. This time however, Superman, Lois and Jon spend the issue reflecting on their time there, as they move all their remaining things from the farm into a moving truck to go back to Metropolis.

Be warned, a lot of cheesiness ensues. And I love every bit of it.

This story also features very little action, and contains father/son moments with long heart to heart talks. Many pages are simply of the family talking, crying, reminiscing on their memories there and the years Jon spent growing up, much more than most comics today. I applaud Tomasi and Gleason for doing an issue like this, as it felt like a wonderful way of capping off a chapter in the Kent family’s life in a way you don’t see in most comics anymore.

3. The Last Will and Testament of Lex Luthor (Action Comics Special)

If “Truth, Justice, and Family” is the Kent family’s last story together in Hamilton, this feels like their first together in Metropolis.

Honestly, there’s nothing earth-shattering about this issue when it comes to connecting to the larger narrative of Superman or the DCU. I just found it to be a really solid story with really great art. This is Will Conrad’s last issue in the run (but hopefully not his last on Superman), and he gets to flex his artistic muscles drawing Metropolis after all the pages on alien worlds in outer space. This issue also features a nice analysis of Lex Luthor’s psyche and has a fantastic twist at the end of the issue that makes for some great reading. 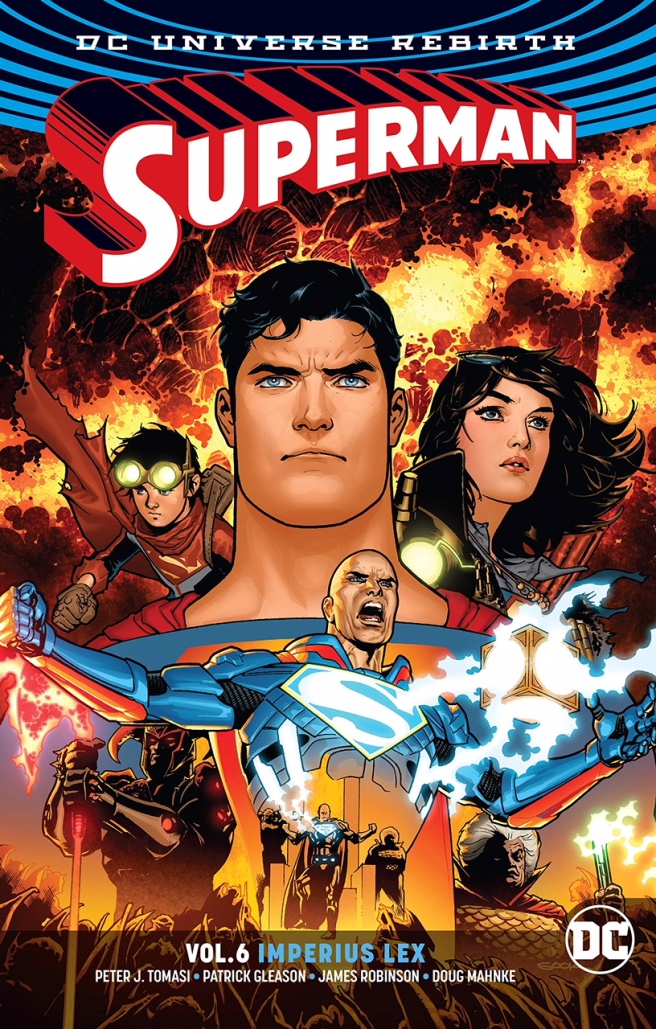 I reviewed this one a while back in more detail here, so for now I’ll simply say that it still holds up. A great story about the Kent family in the midst of a war on Apokalips and how they overcome everything to return home. Along the way they are all shown to be amazing heroes in their own right. 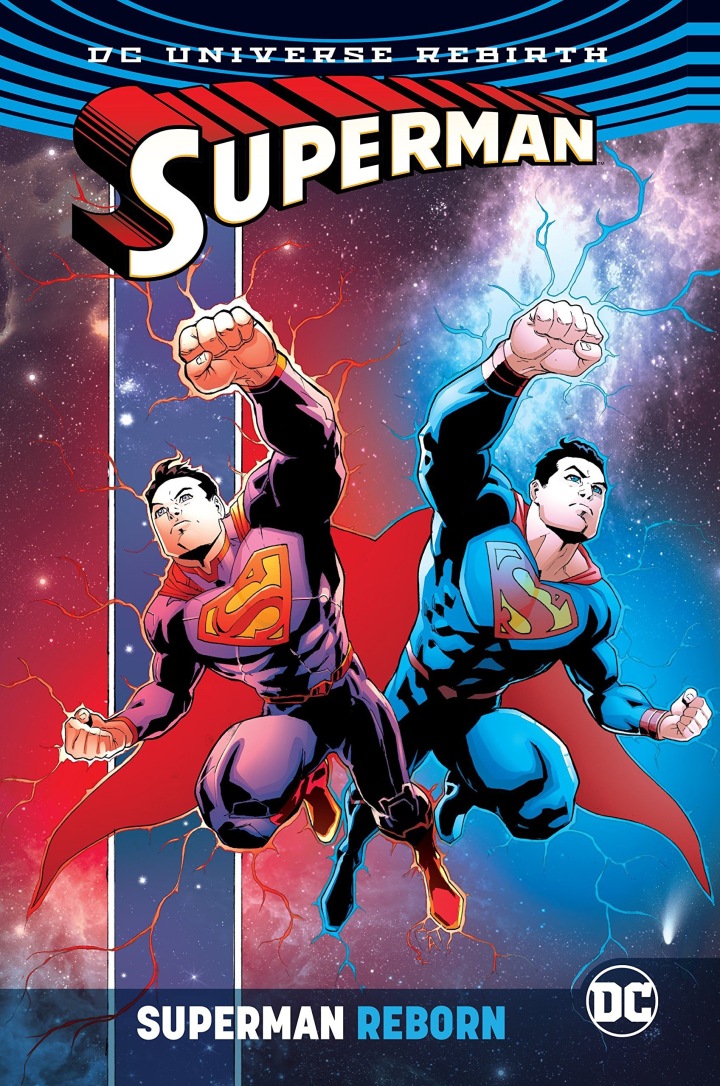 At the end of the day, Superman Rebirth was all about heart and family. There was the usual super action and being a hero, stopping terrible baddies and natural disasters for sure, but the essence of the run is the Kent family.

Superman Reborn, the only crossover between the two titles, solves the fascinating mystery of the second Clark Kent, and also is probably the best Mr. Mxyzptlk story I have ever read, as here he is a dangerous, epic threat. But ultimately, the reason I love this story so much is because it is the love of the family members for one another that wins the day.

In other words, true love does conquer all.

Not only does it conquer all, but by the end of the story true love has put our Superman- the true Superman- and his family, back in his rightful place in the DCU. Nothing could be a bigger compliment (apology?) to the character that we the fans have known and loved for many years.

I don’t really see fans discussing this story much online, and can see that it might not hit home the same way if you’re not a longtime reader. For me, no other story encapsulates this great run more than this one, and it’s written by the three gents who made it happen.

That’s the list! Perhaps subconsciously, five stories on this list ended up being from Action Comics, and five from Superman, which is very appropriate given that both books during this time were great.  I should add one more story as an honorable mention, and that is Green Lanterns 50-57, “Evil’s Might,” a sequel of sorts to Jurgens’ Rebirth run and worth checking out if you haven’t. Thanks for reading!