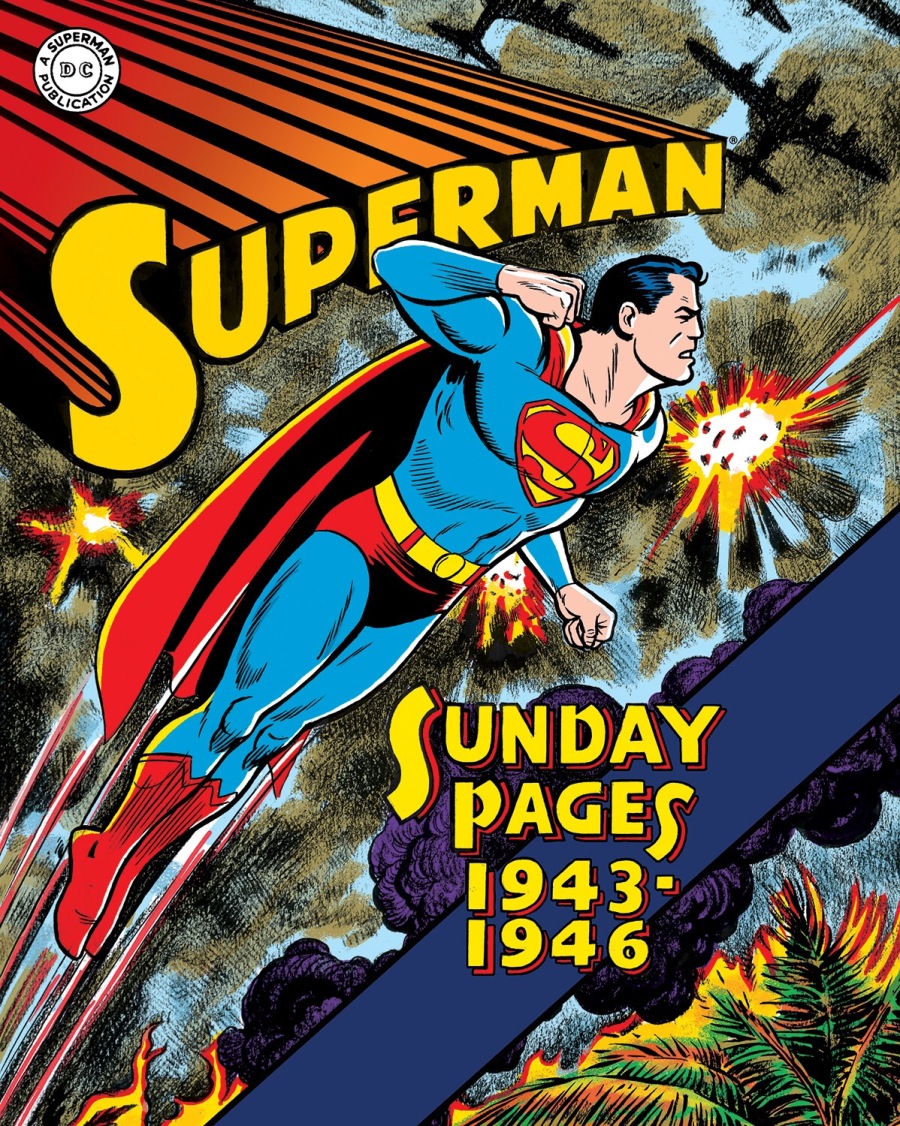 Which is why I was so blown away by this book!

Superman: The Golden Age Sundays- 1943-1946, is an absolutely fantastic collection of stories of Superman during the war years, my curiosity for which grew out of my recent reading of the 1942-1944 dailies. It is another superb offering from IDW’s Library of American Comics imprint, which is doing all of us a favor by publishing so many rare pop culture artifacts like this.

The book is oversized and in full color, not unlike the dimensions of a DC Absolute Edition. It has durable, sewn binding and great, course paper. The reproduction quality is excellent without making the pictures look digital- they are clear and vibrant but still look like they’re printed on newspaper. And much to my surprise, the oversized pages and vibrant color give the art breathing room and don’t confine it. Considering that they were probably read at an even bigger size when originally published, this truly does justice to the stories and why I was surprised by how much I enjoyed them. Quality-wise, I don’t think you can get any better than a book like this. 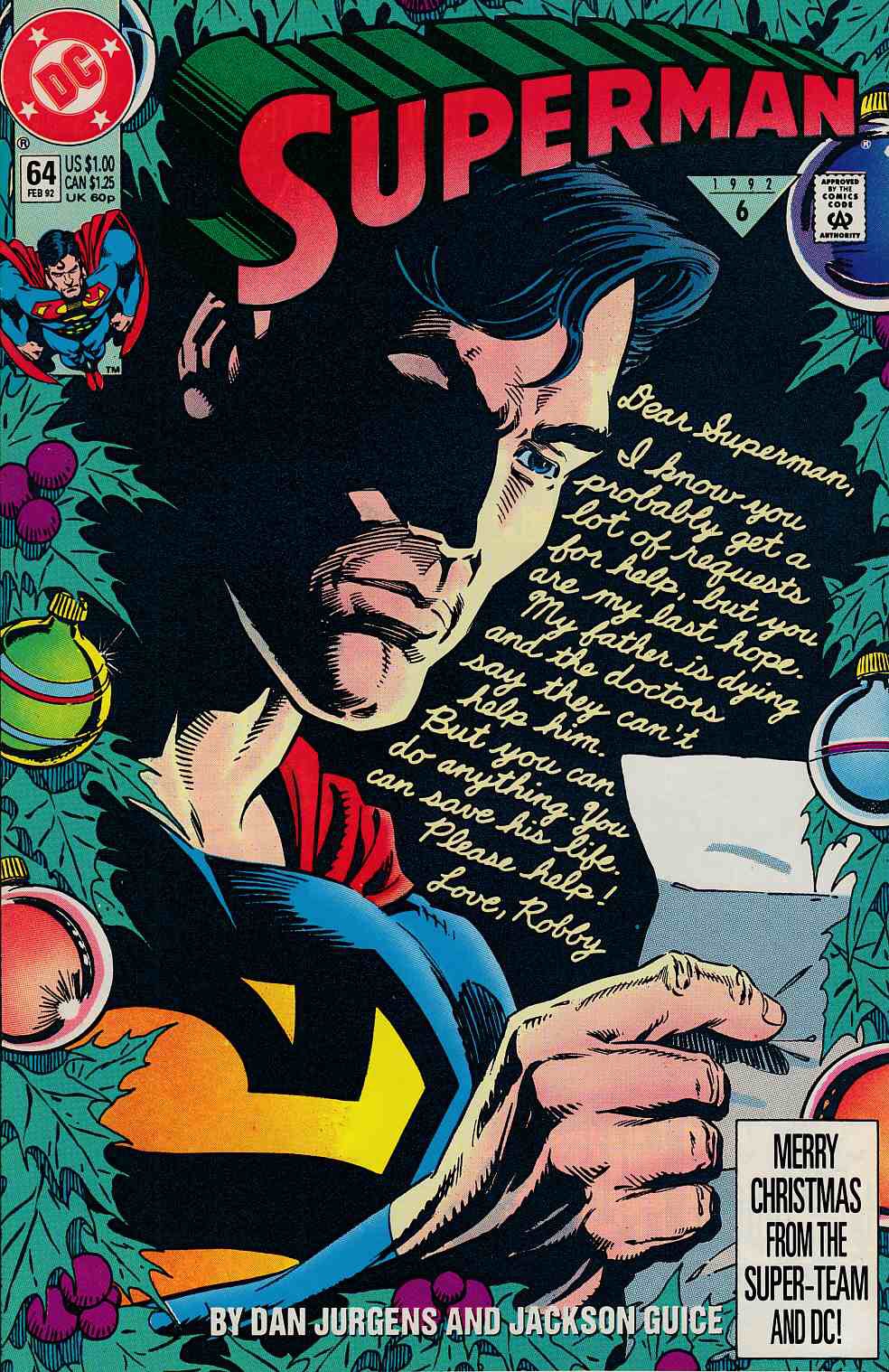 In terms of the stories themselves, they really were top notch as far as the Golden Age goes. The majority of the strips collected here are part of an overarching story called “Superman’s Service to Servicemen,” which ran continuously in the Sunday funnies for the final two years of World War II. War propaganda aside, by 1943 Superman had been in so many personal interest/social crusade stories, that personally I was ready for something different, and this provided it. The book begins with the first “servicemen” story and, like the dailies from around the same period, deal with the war almost exclusively for a considerable amount of time thereafter.

Unlike the dailies, however, in which Superman fought Axis threats himself, this book is about him stepping back and supporting soldiers with their personal issues. There is still plenty of action of course, but also a great many touching moments about how the war was effecting folks back home and morale of the troops on the front. The stories were no doubt meant to drum up support for war bond drives and writing letters to servicemen people knew, and it works great as a comic as well. 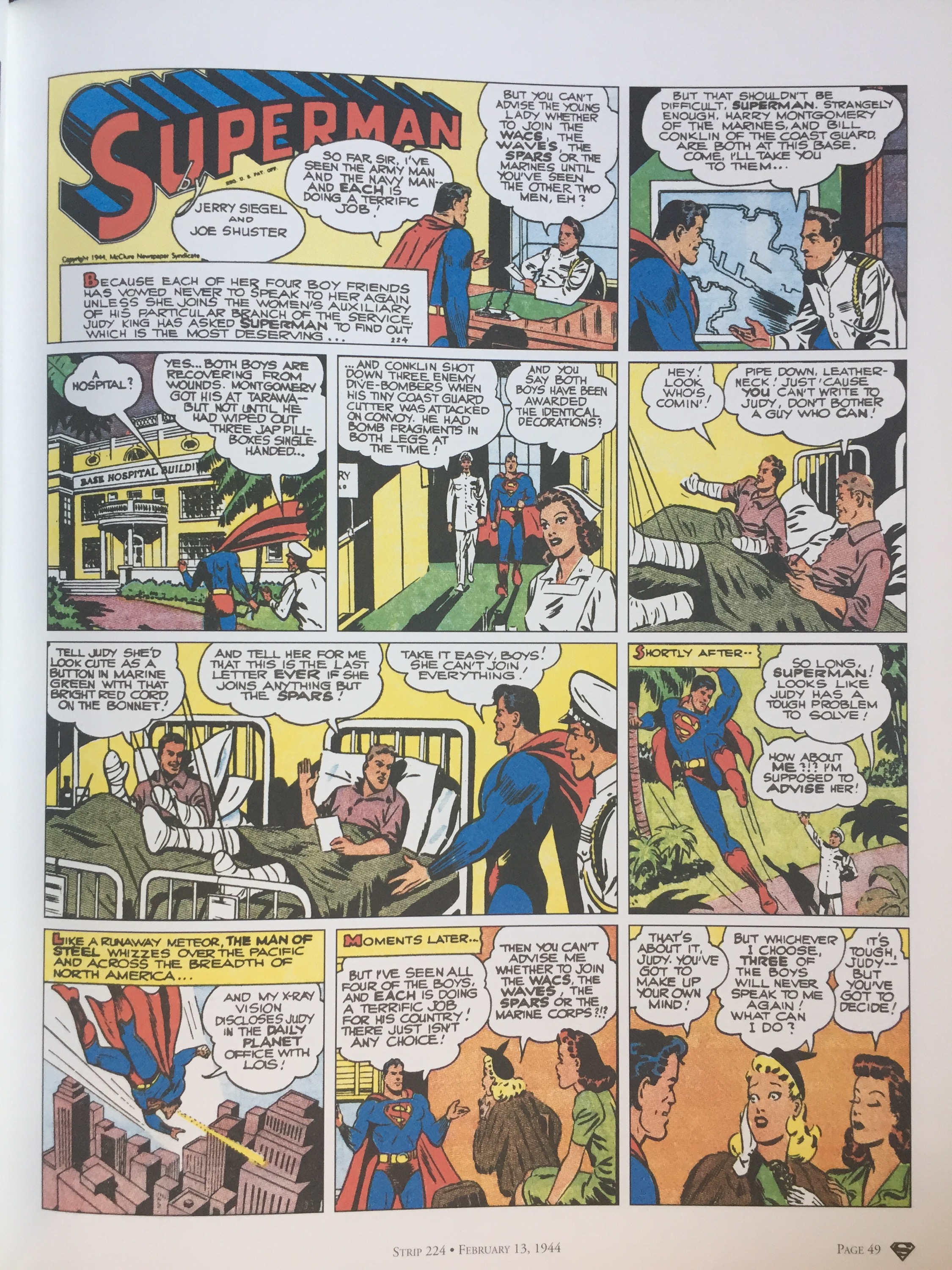 Some of my favorite Superman stories to this day are “Metropolis Mailbag” one offs, which basically had the same premise- Superman responding to letters for help of a personal nature- a medical condition, an estranged family member, etc. In a way, one of my favorite Superman stories of all time, Peace on Earth, is a mailbag story too, so maybe that’s why I enjoy these? Either way, I wouldn’t be surprised if Dan Jurgens and others got a lot of inspiration for their ideas from here. 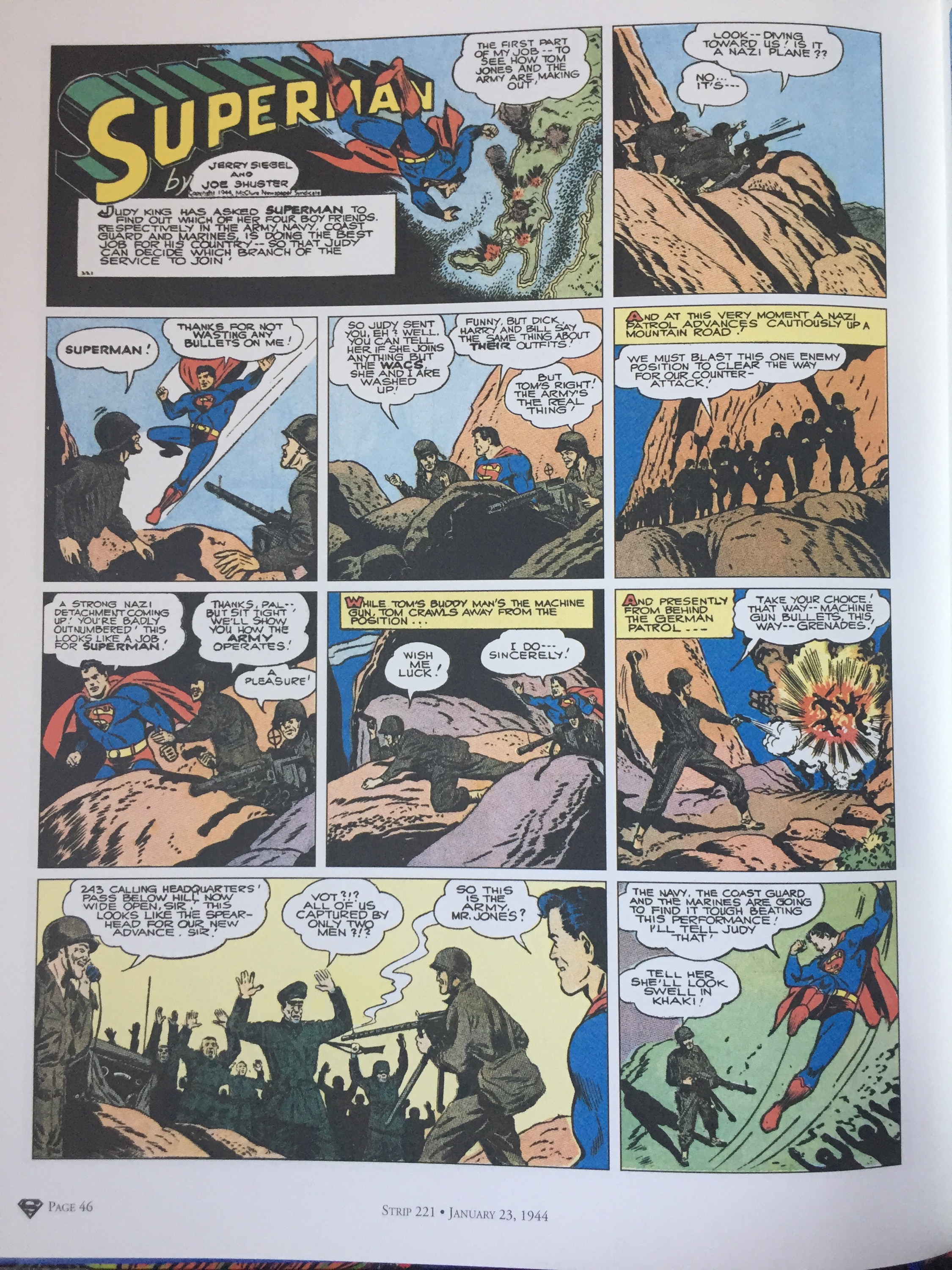 Some highlights of these war year yarns include Superman meeting Hitler face to face (in a very silly story meant to vilify the enemy, as are many of the other stories of the book), Lois Lane as a volunteer ambulance driver, and even stories about how soldiers had to return to a normal life at war’s end. A standard trope used throughout and which I also love is that Superman is beloved everywhere he goes- even by the enemy- very similar to what follows in the rest of the character’s history and is in full swing by 1943. 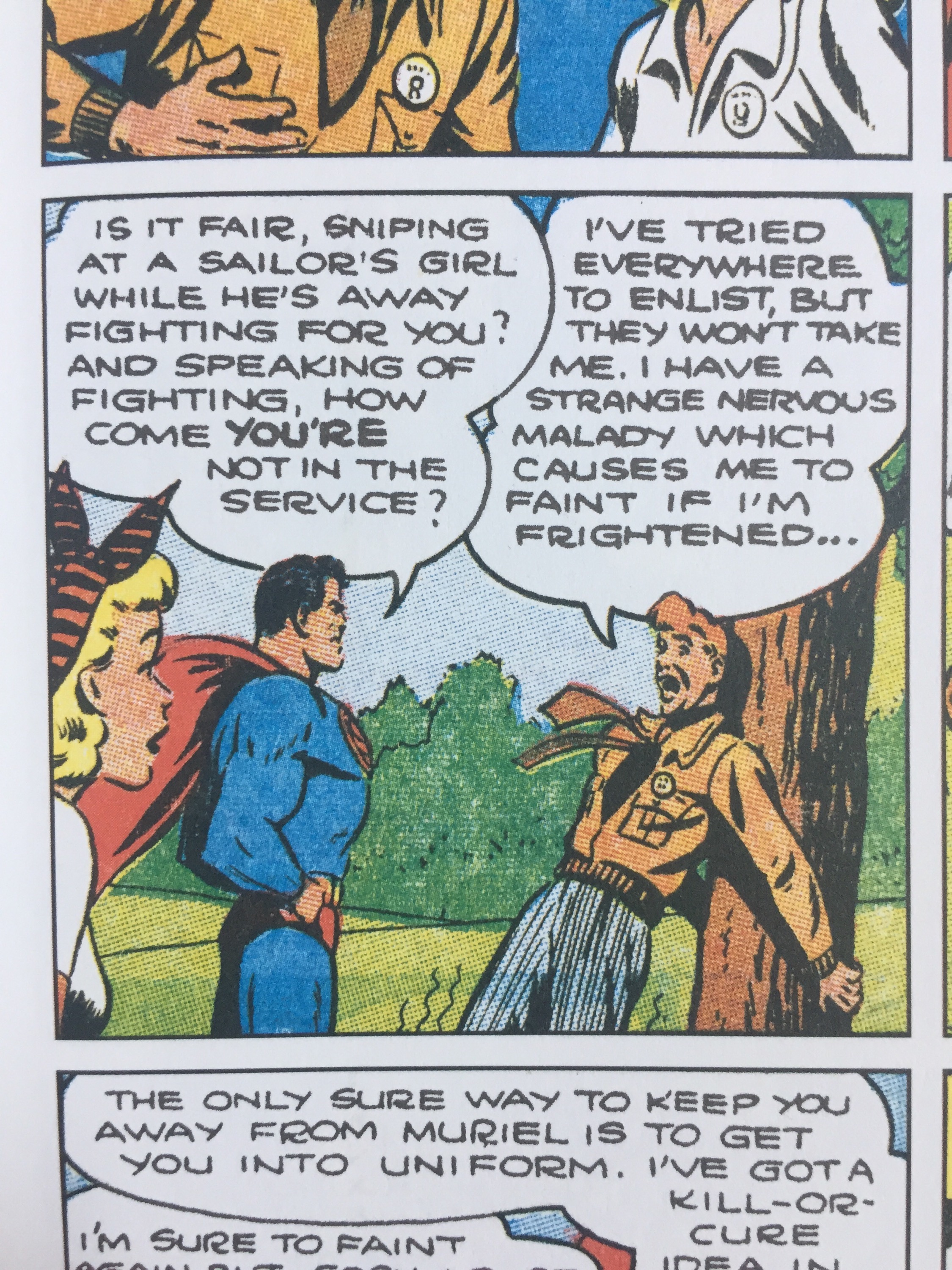 Something important to note is after Germany surrendered in May of 1945, the Japanese kept fighting for the better part of the year. Japan digging its heels in and the Allies’ response led to more bloodshed and eventually dropping the bomb, tragically. The stories collected herein during that period (May-September 1945) contain much ramped up propaganda, and certainly reflected the prevailing mood of the day, viewing the Japanese as the sole remaining aggressors dragging out the conflict. They are not for the feint of heart.

By the end of 1945, the stories have transitioned out of the war and into standard superhero/sci-fi stuff. The only problem was, where to go from here? The Depression was over, and the war was over, so Superman had to reinvent himself again. At this point, the tropes of the Silver Age come flooding in in a hurry. Lois Lane is constantly lovesick and seeking Superman’s attention, the plots and villains are over the top, and it seems that the audience was getting younger, but that’s just my guess. These stories are nowhere near as strong for me but obviously are included as part of a comprehensive series. I probably wouldn’t reread the last year of stories the next time I pick up this book.

The book credits the art by Jack Burnley and Wayne Boring, but I can’t see Burnley in these pages anywhere, unless he was just doing backgrounds or something. Nonetheless, Boring does a fantastic job on the penciling chores as by this time he had become the #1 Joe Shuster ghost artist, a wave he rode well into the Silver Age. The soldiers all have faces straight of a Milton Caniff story, and the locales and military references all look great. The writing was handled by Jerry Siegel, up until he himself was drafted and joined the armed forces. After that, it was handled in house by DC staff, including editors (the book credits Whitney Ellsworth and Jack Schiff, but lines were blurry back then).

I found myself loving this book, a rarity for me given that I don’t often read Sunday newspaper strips. IDW and Dean Mullaney at LOAC should be commended for bringing these rare but important stories in the character’s history to the foreground and giving us an education on Americana. Superman is a lot of fun as the little guy’s hero and by this time, America’s hero as well.

Definitely check out this book if you like the Golden Age, you won’t be disappointed!