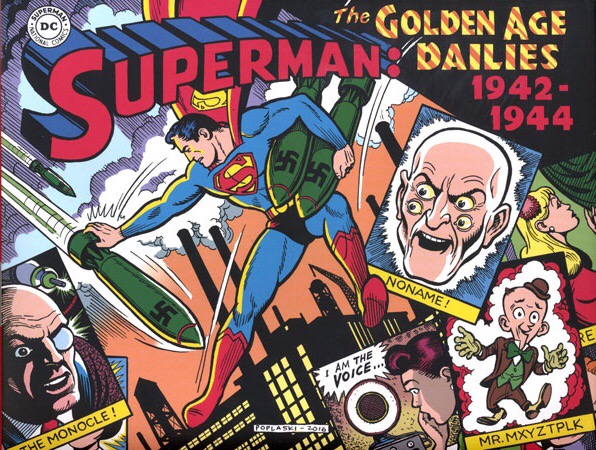 A few years back, I bought a copy of “Superman: The War Years,” part of a “war years” themed series of hardcovers (along with Batman and Wonder Woman) curated by Roy Thomas. As much as I love World War II history and fully respect Roy’s knowledge of said history and Golden Age comics in general, I was a little underwhelmed by the stories collected in that book.

The majority of content was taken from Superman’s comic books and, aside from the covers, found the Man of Steel squaring off merely against villains from fictional, Germany-esque countries, or just the mention of them. At best, the comics featured Superman fighting fifth columnists on the home soil trying to sabotage a factory or munitions plant. Barring that, there were few, if any, mentions of Nazis or Superman fighting their military head on, which was disappointing considering that that was why I bought the book. I’m fully cognizant that Supes was never directly allowed by DC (then National) to fight in Europe or the Pacific during the war, as it would mean the conflict would end in minutes, but come on! Not even once??

A few stories which did feature Superman fighting Nazis directly, however, were included from the newspapers, both the colored Sundays and black and white dailies. Apparently, the higher ups at DC/National hesitated to include war stories in the mainly kids-aimed comics, but were totally okay with such stories in the newspapers, read just as much by adults. A few newspaper stories were included in Thomas’ “war years” books, but only a handful. 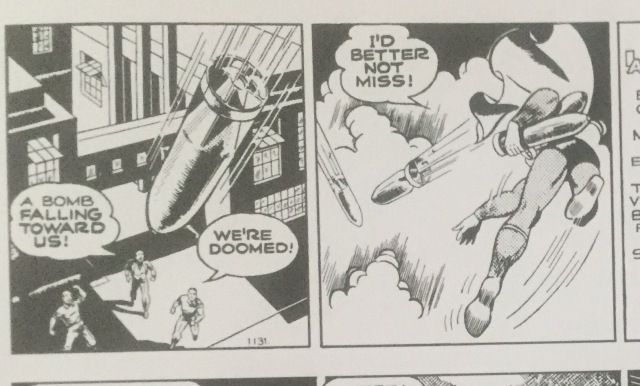 Fast-forwarding to today, I’ve developed a taste for old comic strips and have been working through a few different collections the last few years. Last year I picked up the Superman dailies from 1939-1942 by Sterling and enjoyed them very much.  More recently, I purchased IDW’s collection of Superman dailies from 1942-1944 which begins where the previous collection left off, and finally got around to reading them. Although advertised as something of a “war years” collection, with swastikas and nazi villains on the cover, as far as WWII action?  I wasn’t really holding my breath.

Boy, was I wrong! 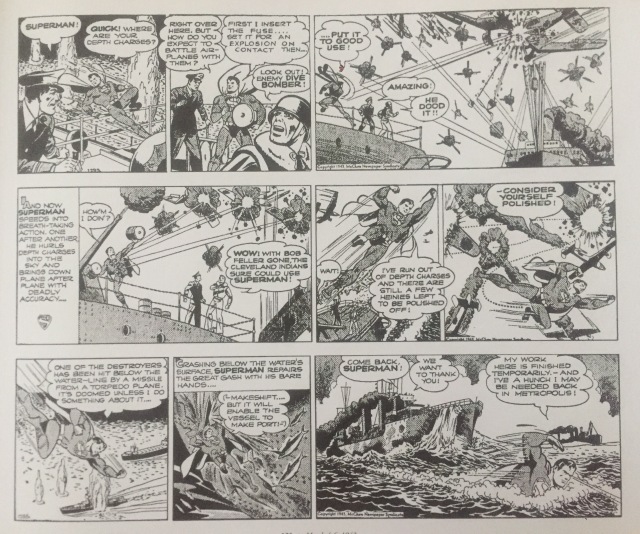 Let me begin by saying I was blown away by the quality of this book in general. I’d heard about the high bar and painstaking care that IDW’s Library of American Comics imprint had become known for, but it really wasn’t until I picked this up that I realized how true that was. The paper quality was great, not too glossy but hardly a matte, either, sewn bound within a nice hardcover. They even commissioned Pete Poplaski, artist of the original covers for the Kitchen Sink and Sterling Press releases of twenty years ago, to do the covers for their Superman collections (as well as their Batman and Wonder Woman collections).

Most impressive of all were the strips themselves, which look fantastic. I’m not an expert on reproduction, so I couldn’t tell you about scans vs original art, restoration, etc., but all I know is the quality of the strips in this book is far superior to the Sterling release. The panels look nice and very clear, and even feature varying degrees of shading- blacks and grays- in the same panel, making it much more interesting to the eye. Given the fact that all of these strips are rare artifacts, and many are no doubt procured from private newspaper collections, it stands to reason that some are a little blurry or not as good as others. All in all though, they look great. The quality of these strips has made me want to look into buying other IDW newspaper collections as well, which is a sign that they’re doing something right. 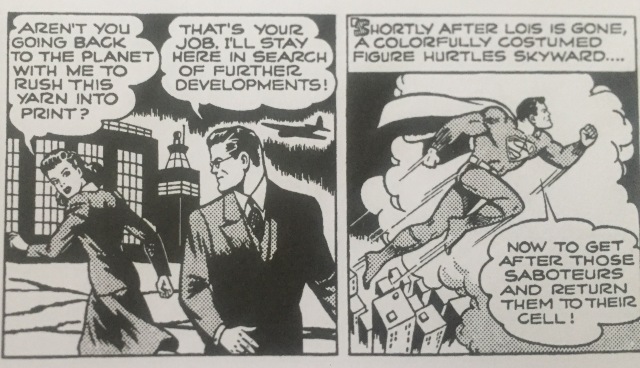 As far as the stories go, I absolutely loved seeing Superman face to face with the war in a way that is not found in the comics. Almost every bad guy of the first year of this collection is either Nazis, Japanese, or fifth columnists, which often leads Superman to face off against airplanes, ships and submarines. The stories are very clearly war time propaganda, for better or worse, and likely blended nicely with other topics that folks were reading in the newspaper. Some plotlines include Lois and Clark being sent to England as war correspondents, visiting a Japanese internment camp, and Metropolis practicing drills during a blackout. While no story in this volume is about Superman halting the Nazi war machine or Japanese empire directly, the war is tied in much more heavily than anywhere else in the character’s history, and I thoroughly enjoyed it.

By late 1943, the strips basically “return to normal” if you will, and Superman is back to fighting the usual fantastical villains and comic-bookish bad guys. Part of this may have had to do with the fact that Jerry Siegel was drafted in the summer of 1943 (for more on that, see Brad Ricca’s excellent “Super Boys”), and part of that may have been just a general fatigue of stories about the war. Although such stories continued in the Sunday pages, in the dailies they were nowhere to be found.  In all, WWII-related stories probably make up about two-thirds of this book, and far, far more than Thomas’ well-meaning hardcover from a few years back.

The remaining third of the book is not without its merits either, as some significant milestones for the Man of Steel can be found in its final stories. First is the debut of Mr. Mxyzptlk (known here as “Mr. Mxyztplk”), who here is more or less the same character he is today in the Superman books, which is pretty impressive all things considered. The first ever story featuring Jimmy Olsen follows, after the character had been growing in popularity from the “Adventures of Superman” radio show. While not the greatest Superman tale, “King Jimmy Olsen” reads like something out of the Silver Age and is very much a precursor to what would become “Superman’s Pal.” Both stories are great if for no other reason than they are milestones in Superman’s history. 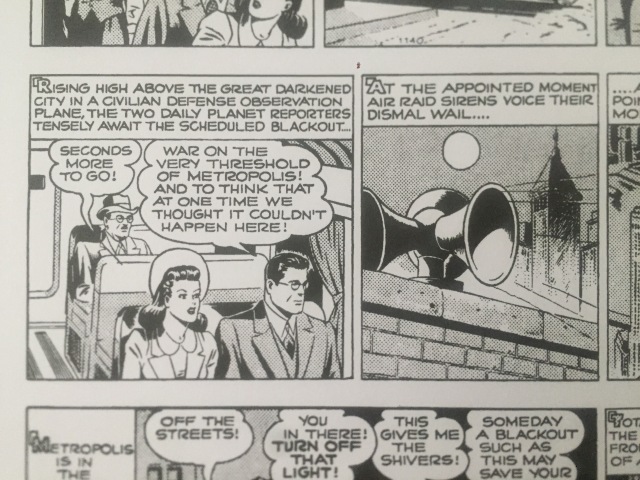 All in all, I loved this book and would recommend it to anyone who is okay with branching out of the current comics style. To be sure, comic strips are an acquired taste and do take patience, but are ultimately worth it, much like old black and white films. Stories could breathe and take their time in the funny pages in ways that comic books of their time couldn’t, making for very interesting reading. If you are a hardcore Supes fan, World War II fan, or Golden Age comics fan, definitely check this out. You won’t regret it! 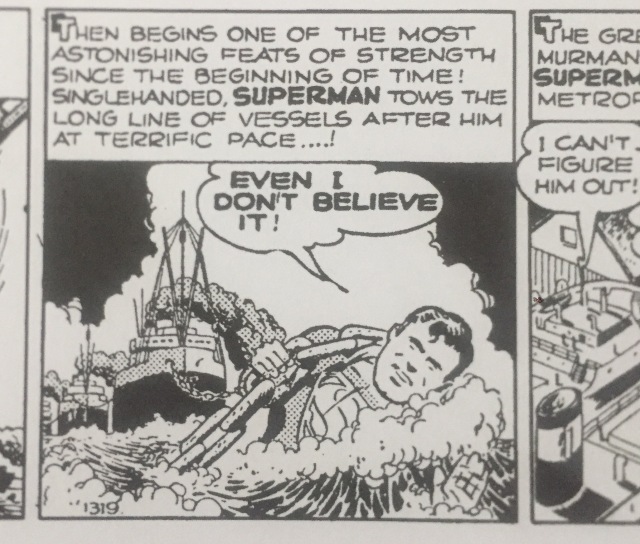