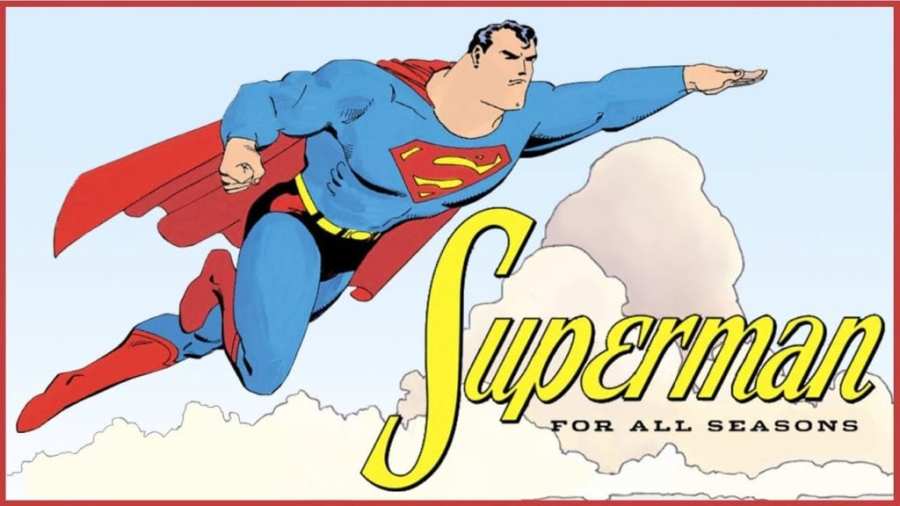 Hi again guys! I recently came across an extensive Tim Sale interview done by The Comics Journal, which had some wonderful insight about the making of “Superman For All Seasons.” I figured I’d post the excerpt of that interview that related to Superman here, as a way of continuing my Tim Sale tribute.

After the Halloween specials and Long Halloween, were you starting to get a little sick of Batman? Is that what prompted Superman for All Seasons?

Well, “sick of” is too strong, but yeah. What I remember is that Jeph had always been interested in doing Superman with me. Because he loved Superman, but also because he saw the business sense in it. In my opinion, there are only three real icons in comics, and Batman and Superman are two of them, Spider-Man being the other one. We’ve now done all three, but having done a lot of Batman there was a sense of “Why not do the other one?” I just didn’t see it. I couldn’t feel it. In my memory, it was very quickly that I suddenly did, and I don’t know what prompted it, but I know that my [way] in was influenced by two things. One was Norman Rockwell, and an idea of describing America and goodness via an image of it. So Americana, not America; and goodness as an ideal, something to aspire to, not reality necessarily. And if you’re Superman, you can do a lot more obviously than most people, but you’re still going to be constrained by what you can and can’t do. The story’s about what you can’t do.

So that was one thing. The other thing was there was a DC Christmas special that was an anthology. Paul Chadwick wrote and drew the Superman story. And this is one of the things that will happen with Jeph and me — we both remembered it, and we’d never spoken of it prior. It’s relatively obscure. It’s not like it was a big hit or anything. It’s about an old man in a car in the middle of winter. His life is in the crapper for some reason. I can’t remember what — I think he’s lost a job. It may be the kind of thing that if he dies, his wife is gonna maybe get some insurance money. He’s sort of doing it for her. But he’s also very sad and self-pitying. And Superman shows up. What he does is, he gets in the car with him, and talks to him, and talks about doing the right thing; and talks him out of killing himself. Then he becomes Superman. He uses his heat vision to heat up the engine block, which was frozen, digs him out of the snow, things like that. But it was about the goodness and the humanity of who Superman is. And I loved it. I haven’t looked at it in at least a decade, and, again, I don’t know the name of the story. I know that Paul didn’t ink it himself, and it’s fairly crudely drawn. But it was a great take on the character. For both Jeph and I, it was a big influence on Superman for All Seasons, as a way of looking at the character, and who he was and wasn’t. Ways that he was special that were not just bouncing bullets off his chest and changing the course of mighty rivers. So all of a sudden — at least my memory of it was that — it made sense to me. I remember saying it to Jeph, and Jeph was flabbergasted. Because he’d been pushing Superman for years and I’d been saying, “No,” and all of the sudden I was saying, “Yes.” He got very excited. It was the only time it’s ever been like this for us — we had this talk, and it was relatively short, but it was clear that he was excited, and that excited me. We hung up and I called him a few minutes after that and left him a message, saying, “I can’t stop thinking about it. I just wanted to call you again.” He called me in a few minutes and said, “ I was just about to leave you the same message.” It was one of those things that just solidified in our brain.

Then the actual process of doing Superman was an entirely different thing. How I was gonna draw it and how we were gonna write it were in flux, and we knew we wanted it to be really different. There was no point to doing it like Batman. The whole idea was that it was an entirely different character, and that should be reflected in both our work. We were at San Diego, and I would describe that I wanted to do the blue-line process, because computer coloring was really crude at the time. I didn’t like any of it. It was like everybody had just learned Photoshop, and they wanted nothing but kick lights and lens flares, things like that, or garish coloring. Jeph really didn’t know what blue-line was. He didn’t know what to expect. So it wasn’t until he saw some sample pages from the colorist that we were working with, Bjarne Hansen, that we were really excited.

To my knowledge, Superman for All Seasons may have been the last blue-line process thing DC ever did, maybe even the last done in comics. There are a lot of registration problems that you can run into, there are a lot of presentation problems that you can run into. But DC was great about it all, and it really, really affected my approach and the look of the book in a very positive way, I think. I’ll always be grateful to DC, Richard Bruning in particular. The headaches that came after that, though, with my approach and the way I was gonna draw Superman, was an entirely different thing. There was a lot of back and forth about that. My idea was that I wanted it reflected in the physicality of Superman that he wouldn’t have to go to a gym to work out. He’s an alien, so he was this kind of giant. The intent was that he looked like he was a corn-fed country boy. But if you don’t do that just right he looks kind of retarded, or slow, you might say. And DC freaked. I think they expected Long Halloween Part 2. And it certainly wasn’t that. And then you’ve got their flagship character maybe looking like a doofus — “What the hell is goin’ on? This isn’t what we’re paying for.” It took a while to calm everybody down and prove to them that we had an idea that made sense. To give them their credit, I didn’t have it quite right at first, and they had a point. He did look kind of like a doofus sometimes. And also to give them credit, they did ultimately allow us to do, and me to do, our vision of what we wanted it to be. But there were some growing pains along the way — all of which, when I won the Eisner for Best Artist of the year, was forgiven. [Laughs.] That was a nice point of validation for me.

You can find the rest of the interview here.