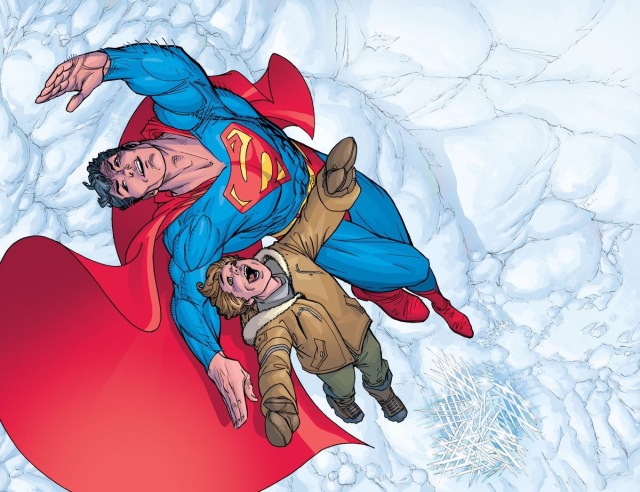 Geoff Johns’ has often said that the greatest strength of the DC Universe is legacy. He focuses on this quite a bit in his stories, and we’ve gotten some real classics out of it.

While I wouldn’t quite go that far with this one, I recently picked up a deluxe edition of Superman: Last Son and finished a reread that I enjoyed a great deal. This book contains all the stories that Geoff Johns initially wrote with his mentor, Richard Donner- a “legacy” of sorts in itself- and the centerpiece is their first collaboration together, “Last Son,” a story about Superman and Lois Lane adopting a young Kryptonian boy.

Without giving away too much, the theme of the story is family. Long before Superman being a dad was a given, this story explored what that might look like, very likely because it was being done in Superman Returns at the same time. In any event, Superman discovers a Kryptonian ship landing on earth, which he finds is carrying a boy from Krypton who can’t remember how he came to the planet. This catches Superman greatly by surprise, as at this point in the DCU he was still more or less the lone survivor of his race. Relying on Lois and his own parents to help him, he explores what it means to have family in ways he had never felt before. Villains, of course, show up eventually, and the story leads to a great crescendo.

Johns and Donner both specialize in character moments, and fans of Donner’s Superman franchise will probably get a kick out of seeing Zod, Ursa, and Non in comic book forms. The trip through the phantom zone is very cool as well, as Johns leans in to the Silver Age themes that had been reintroduced into the books by this point. There are great one liners and character explorations. The writing is solid.

The book’s art is handled by Adam Kubert, who by in large typifies the slightly offbeat nature of the art through the book (others include Eric Powell, Arthur Adams, and Joe Kubert himself). Kubert does a great job with cinematic storytelling in his panels, wonderful emotion in his characters’ faces, and best of all, mega action scenes, which I had never known were in his wheelhouse. Although a different type of artist that fans of the Big Guy might be used to, here he does a great job.

The book itself is also solid. I love hardcovers for collecting your favorite all time stories, and newer stories in DC’s history lend themselves much better to bigger pages than art older than twenty years, as they were first printed digitally and can be blown up without as much restoration. Some like these thin oversized hardcovers so much that they believe it is DC’s best format for reprints, and I can see why.

My only hang ups with the book is that DC has a collected editions department that often pays no attention to detail. For one, Action Comics Annual 10, published a year before Last Son, is included in the book after Last Son, despite the fact that it is a prequel. I would have much preferred it opened this volume, as it doesn’t read cohesively. A story Johns and Donner wrote together from Action Comics 1000 is also omitted for some reason, even though it would have been great to have. It won’t change anything about your Last Son experience, but it would have been nice to make this a comprehensive Johns/Donner volume, especially when that story was a mere five pages.

All in all, I’m glad this book was published, and the stories inside are great. Reading them once again just shows how much of a grasp Johns has on all the DCU, and how the company was on a roll during this era.