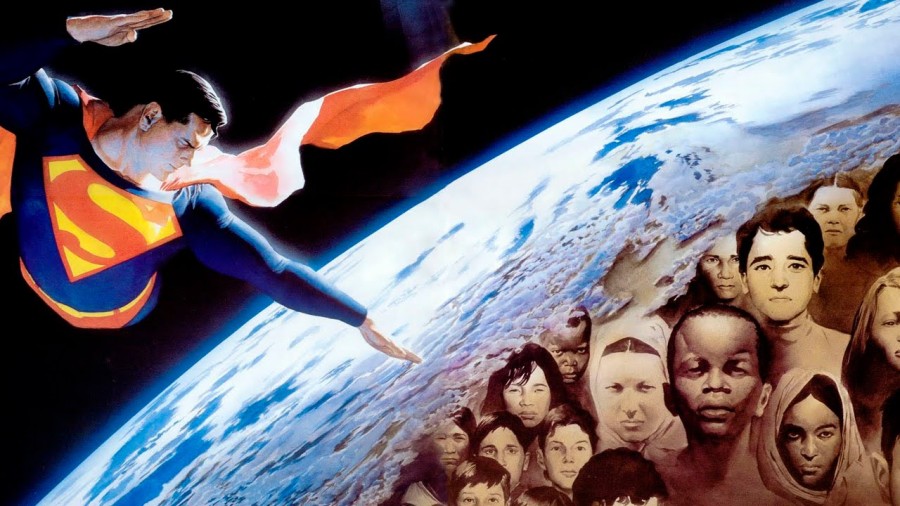 Hey guys, with Christmas rapidly approaching, I thought I’d post a very personal article I wrote for my other blog a few years ago.  Enjoy!

There have been a few times in my life that a comic book has moved me to tears.  There is only one that moves me to tears every time I read it.

In the early 2000s DC Comics released a series of beautifully written, lavishly painted books in “tabloid size” (i.e. massive 10”x13” pages in a softcover format) meant to encapsulate the essence of each of their major characters.  Each was written by the talented Paul Dini and gorgeously painted (not drawn) by superstar artist Alex Ross.  Needless to say, each one was a knock out of the park. 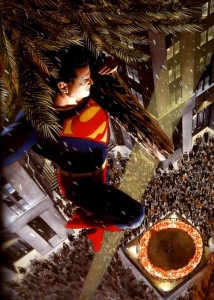 The premise of Superman: Peace on Earth, the first book released in the series, is the same as that of so many great stories: a main character’s journey of self-discovery with Christmas as the backdrop.  If this sounds like the premise of a certain Jimmy Stewart movie played every year during the holidays, it’s meant to.  There is, after all, a reason “It’s a Wonderful Life” has become a timeless classic!  The similarities between Bedford Falls’ favorite son and Krypton’s last son, however, begin and end there.

The story begins with Superman flying a gigantic Christmas tree to a Rockefeller Center-esque park in Metropolis on a snowy winter night.  After lighting the tree to the enjoyment of many, the Man of Steel hears a gasp from a young girl in the crowd suffering from cold and starvation.  After taking the girl to a nearby shelter and seeing the great number of others in need, he is moved to take matters into his own hands.  After researching the statistics of poverty and hunger like a good reporter and reflecting on lessons taught to him as a child, he endeavors to eliminate the world’s hunger for one day.

Let me repeat that: eliminate world hunger for one day. 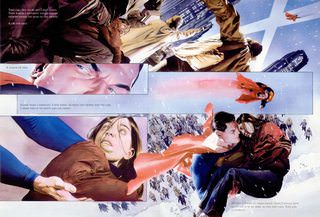 Amazing, right?!  If only the Hollywood powers-that-be brought premises like this to DC Comics’ big screen adventures… but I digress.  What ensues is, for me, the greatest battle of the character’s nearly eighty year history.  The book beautifully depicts Superman debating before Congress, then going to every continent over the course of twenty-four hours to bring as many staples as he can to every man, woman and child on the planet.  Without spoiling the story, the ending is one that I personally did not expect and one that I think will move any reader a great deal.  Let me merely say that feeding planet earth tests the Man of Steel’s physical mettle as well as his character.

Say whatever you want about Superman being “too perfect” to be interesting or too much of a “boy scout,” but I eat this stuff up with a spoon.

When writing superheroes, the first thing the writer must remember is that these characters are “heroes” even without the “super.”  If any human being was able to do what this fictional, ridiculously costumed character could do, who among us would choose to feed the world?  Would I?  We ask ourselves these questions as human beings from time to time, perhaps more so during the holidays, as philanthropy and Christmas go hand in hand (or they should, at any rate).  I read this story and find myself reexamining my own efforts to feed the poor, both in my personal life and in the life of my parish. 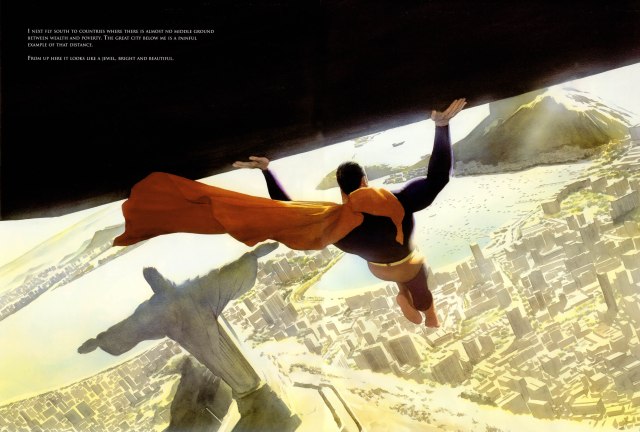 When I see the splash page of Superman flying almost angelically past the statue of Cristo Redentor holding over his head a tanker filled with grain, I ask myself if I am endeavoring to do the same in my own corner of the world.  Herein lies the power of this story.  As I’ve said before, art, even panel illustration (aka “comic books”), can be very powerful, in that it can convey a thought, an emotion, that if done well can get us to think and feel something we might not have before.

I teared up reading this story again a few nights ago, and my eyes have not stayed dry writing about it today.  I guess you could call it my “It’s a Wonderful Life,” that one story we can go back to year after year and let it warm our heart despite having seen it a million times and know everything that’s going to happen.  My prayer this year, however, is that I don’t just enjoy letting the story move me, but that it move me to act and follow its example.

‘Tis the season, after all.