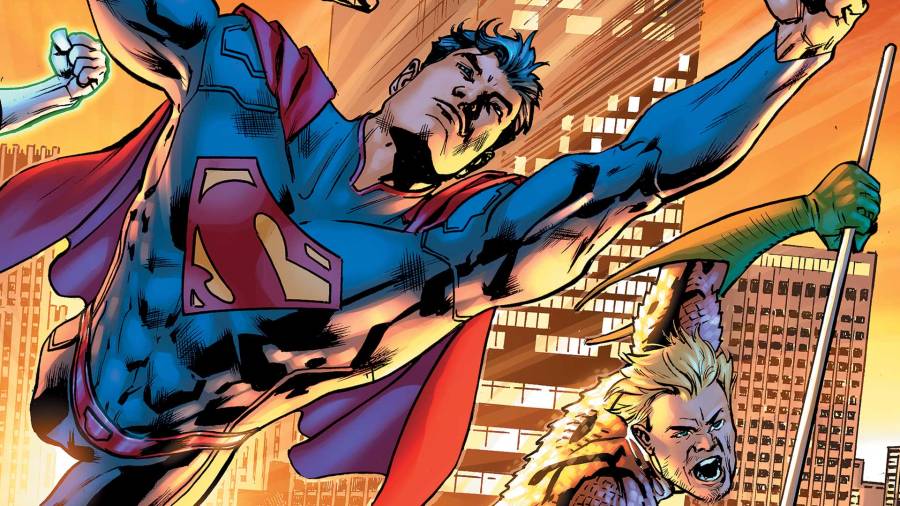 Please note that, while I try to keep all my reviews as spoiler free as possible, the following has some major spoilers on the new Justice League book, Power and Glory!

You’ve been warned! Read on!

I love me some Justice League.  I really do.

The problem is, like Superman, too often writers can get it wrong.

For me, the Justice League is not the Avengers, the X-Men, the Fantastic Four, or any other superhero team in comics.  Since the power levels of its heroes are so massive in DC’s mythology-heavy universe, it’s not like you can do “day in the life stories” each month (which most, if not all of the lineup has their own book for, anyway).  On the other hand, you can’t always have world-ending threats either, otherwise it gets tiresome.  I know it makes sense to have at least one or two JLA books on DC’s slate each month for sales purposes, but really, the Justice League works best when the characters team up only on occasion, whenever the threat level makes it absolutely necessary to do so.  Maxiseries like this one, written and drawn by the inimitable Bryan Hitch, are the perfect vehicle.

As a creator, Hitch really needs no introduction.  Every book he’s associated with is an event, and one look at his art shows you why.  The scope is massive, the layouts of his pencils are cinematic, and his character moments are great, too.  In a lot of ways, he has emerged in the industry at a perfect time, when it seems like any successful book nowadays is being optioned for movies or TV, as is evidenced by how heavily The Avengers borrowed from The Ultimates (Joss Whedon even writes the introduction to volume 1 of that series).  I thoroughly enjoyed all his stuff at Marvel, as well as his brief run with Mark Waid on JLA in the early 2000s.  So when I heard he was going to be taking on a new JLA book during DC’s New 52 era, this time taking a stab at writing and penciling, I had to check it out.

I had already read the first volume of the DC Rebirth Justice League last year by Hitch (released after Power and Glory), and wasn’t too impressed.  The art seemed rushed and the writing was clunky.  However, having checked out the first issue of PaG when it was released in 2015 and loving it, I decided to give the collected edition a chance.  Don’t ask me how I managed to trade-wait on this one for two years, but I finally bought the paperback edition of the very Superman-centric JLA: Power and Glory last month.  How did it fare?

Overall, quite well, actually.  Let’s start with the pros:

Even though this volume collects 10 or so issues, it is one epic story, much to my pleasant surprise.  The premise, of course, is about a god-like being from Krypton’s past sensing the presence of a Kryptonian on Earth and setting out to find him.  What his motivations are remain a mystery until the end, but for much of the book, the being known as Rao spends much of his time on Kal-El’s adopted homeworld healing the sick of their illnesses and afflictions and inspiring people to worship him as their god.  Much of this plot feels derived from Geoff Johns’ “Thy Kingdom Come” story from Justice Society of America, as well as Dan Jurgens’ Thor run from the early-2000s, both of which I love, so I’m totally okay with.  The League’s role in all this becomes necessary when questions begin arising as to Rao’s identity and true motives.  The results are huge fight scenes and great moments to shine for each of the members of the league in this book as they endeavor to save the day.

As for the story itself, Hitch’s writing is actually pretty good!  It is miles ahead of his Rebirth stuff in terms of dialogue and overall plot, which is great.  It’s almost as if he had one Justice League story in him he wanted to tell, and then DC talked him into writing further adventures later on to very mixed results (just my theory though).  His pencils are solid too, as always, although they are nowhere near the level of his early-2000s work on Ultimates and JLA, perhaps because he had more time on those.  Here the pencils are about the same level as his Fantastic Four run with Mark Millar, which is still pretty darn good.  For me, Hitch at 50% is still better than a lot of artists in the business today. 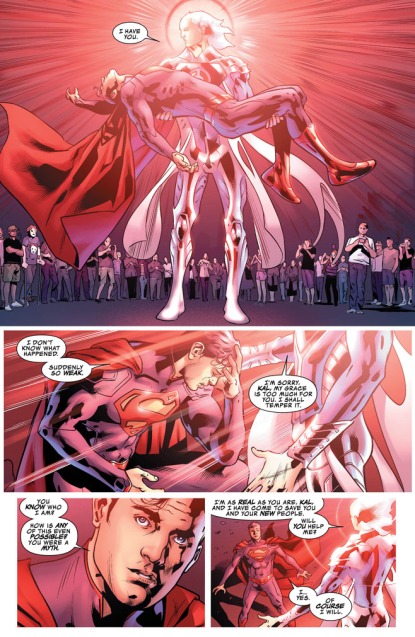 Finally, as a Superman fan, I love that so much of this book is based off a story element from Superman’s past, making this a very personal story for him.  The baddies of the story may be Rao and his followers, but the heart of this story is what this means for Kal-El.  Does he betray his roots and his family’s lineage?  Does he side with Krypton or Earth?  As many great Superman stories do, Superman’s two homeworlds are at odds with one another here, and Hitch gets that.  The story even includes some really cool subplots of Wonder Woman finding Olympus and its gods completely obliterated, and one where Green Lantern (Hal Jordan in this book) goes to Krypton’s past to learn Rao’s origin.  Hal even stays there so long that when he is finally pulled back to the present he sports a hardcore beard after being imprisoned.  A minor detail, but one I find pretty cool. 🙂

Really, as far as pros go, there’s plenty to like about this story.

Still, it wasn’t all perfect.  A few minor quibbles I had about this book are two that, unfortunately, really couldn’t be helped by Hitch, at least from what I see.  First, I’m not a fan of the New 52 continuity, and this story, although it stands on its own well enough, does tie into it.  Hence, we get the Superman/Wonder Woman relationship while Lois is nowhere to be found.  Although that’s been hinted at in the other timeline as well, I was never a big fan of that relationship as it just seemed so obvious that it’s boring.  It’s easy for a godlike being to be in a relationship with another godlike being, but far more interesting for a godlike being to be in a relationship with a human being.  We get some great conflict and dilemmas out of that that you don’t otherwise get when dealing with two characters who are essentially “perfect.”  Thankfully, although this is New 52 Superman, Hitch writes him as classic Supes, one who is confident and mature, and who doesn’t struggle with his powers or ethical dilemmas.

Second, I’ve never been a fan of Batman on the Justice League.  For me, he just doesn’t belong on a group that’s dealing with the end of the universe, other than as a sponsor or occasional “team smart guy.”  Whenever Batman stands side by side with Superman, Wonder Woman, Green Lantern, Flash and all the rest, writers tend to overcompensate by writing him as “super prepared Batman,” or, as Grant Morrison fans like to call him, “Batgod.”  He can do no wrong, can invent anything and knows everything, which is quite frankly really, really annoying.  The best Batman stories are firmly grounded in urban settings against urban crime, not in outer space and pocket dimensions.  Hitch doesn’t use him a whole lot in the story though, so Bats is in the background more often than the foreground, as it should be in a Justice League story. 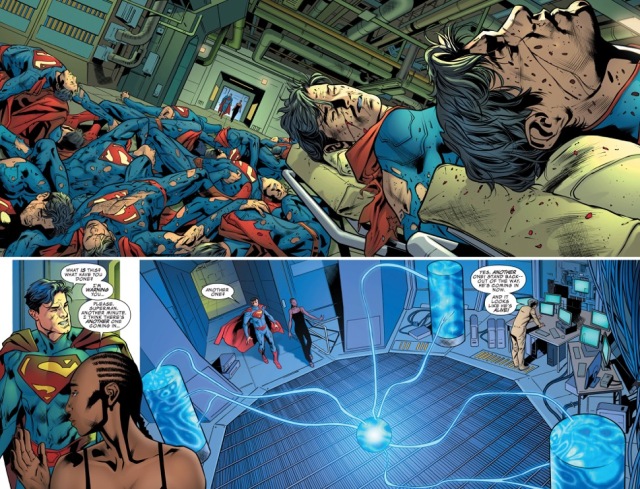 Lastly, while I enjoyed the theme of faith in this book, and how “blind” it should or shouldn’t be, I think that, at least in the Western world, seeing religion as something for the gullible or uneducated is becoming a bit of a stereotype.  I’m getting tired of anyone who is religious, of any kind, being a bad guy in stories, or at best, a naive bystander, as Superman is in this story.  It might be interesting in one of these adventures in which faith and religion are a theme that the positives be juxtaposed against the abuses of religion.  Too often writers focus on the latter, where I think it would be more artistically brave to focus on the former, or at least mention it.  Then again, maybe I’m just reading too much into this, but all this is just my two cents.

Overall, anyone would do well to pick this book up, whether you’re a hardcore comic book fan or have come to know these characters through their Hollywood counterparts, something that is a very hard balance to strike nowadays.

A great Justice League story and a solid Superman story to boot.  I loved it.